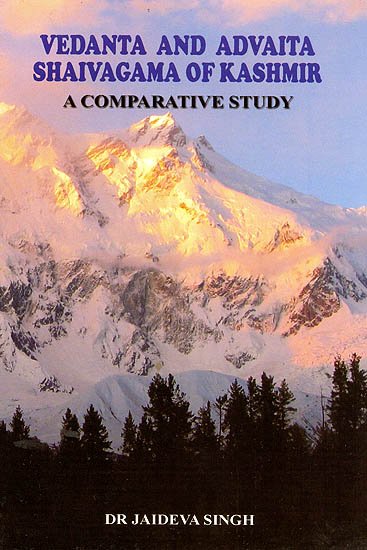 We will now turn to Jaideva Singh’s discussions of non-dualism in Buddhist and Hindu philosophy. Vedanta and Advaita Shaivagama of Kashmir is a short book of 51 pages and consists of the transcripts of three lectures that Jaideva Singh gave in 1984 as Banka Bihari-Hemangini Pal memorial lectures at the Ramakrishna Mission Institute of Culture in Kolkata, India. As these were lectures, they are flowing, have minimal references and footnotes, and are a good introduction for the novice. The three lectures are: “The Philosophy of Vedanta,” “The Philosophy of Shaivagama,” and a short “Comparative of Vedanta and Advaita Shaiva Philosophy.” I have heard it said that we should not use the term “Hinduism,” but rather should use “Vedanta” or “Advaita Vedanta.” Vedanta comes from the religious texts, the Vedas. Advaita means “non-dualism.” However, there Vedanta and Advaita Vedanta appear to be one of many different philosophies that make up the larger concept that “Hinduism” seeks to represent. Just as there are many different Christian sects and “Christianities” there are many different “Hinduisms” and “Buddhisms.” We can use words to understand the world, but we can also use words to muddy the waters of reality and confuse things and bring about dualisms and separations. This is the challenge that the mystics have after glimpsing unitary reality when they try to bring back and teach what they have experienced. Jaideva Singh starts his lecture with the statement, “An unfortunate fact about Vedanta is that it is generally considered to be synonymous with Shankara’s philosophy. Advaita or Vedanta has come to mean the philosophy as propounded by Shankara,” (1). Shankara lived, most likely, during the first half of the 8th century CE and is credited with unifying different schools of Hinduism and distinguishing Hinduism from Buddhism. Singh states that in his lecture “we shall try to go to the original source and see what the truth yields to us…we shall take our stand entirely upon the Upanishads,” (1).

Lecture 1: “The Philosophy of Vedanta”

“I am the self in the inner-most

heart of all, I am their

I am the speech of the letters,

The other meditation Singh speaks of is on the heart-centre, the Dahara-Vidya which is recommended in the Chhandogya Upanishad, which he quotes. “What is here in this city of Brahman is an abode, a small lotus-flower. Within that there is a small space. That should be searched out, that is what one should desire to understand,” (15).  Singh ends this lecture reminding us that this is the “mystic heart,” not the physical heart. “One has to meditate on it. This leads to the transformation of the empirical mind into the Divine,” (15). This is what Joseph Rael and I are working on in our next book, Becoming Medicine. Going into the center or our own heart, which is also the center of the universal heart, the center of the medicine wheel, a journey which sacralizes us into medicine.

Lecture 2: “The Philosophy of Shaivagama”

We will not go into exhaustive detail of this lecture which makes up the bulk of the book and covers the 36 Tattvas of Universal Experience, amongst other things. These describe the series of stages from the Ultimate Unitary Reality through the various possible states of manifestation which can be viewed both as a 36 rung ladder out of the Unitary into diversity and back from diversity into Unity. This is a very helpful introduction to Kashmiri Shaivism and would be a nice reference for reading any of Singh’s larger works of translation.

Singh describes some of the different terms used to represent Unitary Reality, such as annuttara (the Highest Reality), however all these terms represent “the changeless principle of all change,” (17).

Shiva and Shakti, the universal masculine and universal feminine are in a yin-yang-like relationship, each is part of a larger whole. Through science and logical thought, which we have so developed in Western languages and cultures, allows us to see how things are distinct and separate and this has given us tremendous knowledge and power over the material world, and yet we lose something of our souls when we specialize in the function of separation over the function of union. In becoming masters of what Joseph Rael calls “ordinary reality,” we may bring about our own destruction by becoming illiterate in “non-ordinary reality” which is the realm of unseen interconnection. Singh describes the roots of the word maya, often translated as illusion. “Maya is derived from the root ‘ma’ which means ‘to measure out.’ That which makes experience measureable, i.e. limited, and severs ‘this’ from ‘I’ and ‘I’ from “this’ and excludes things from one another is Maya,” (31). It is interesting to ponder this cross-culturally to look at the project of knowledge in the West which so highly values objectivity and the ever increasing division of the whole into parts which can be separated, isolated, and then controlled and manipulated. Singh might say that the project of knowledge in the West is purely a function of learning diversity and separation, maya, or that which is transitory and illusory. Physical science, based on the scientific principle of objectivity, is only half of reality, and perhaps not the most important half, because its knowledge comes at the expense of holistic, spiritual, and intuitive elements of human beings and of Ultimate Reality.

One of the teachings that Singh describes near the end of this lecture is that of Varanyoga, which describes a vibration of “an imperceptible, inarticulate sound which is known as varna,” which goes on “naturally and continuously in every living creature,” (42). “No one sounds it voluntarily, nor can any one prevent its being sounded. The deity abiding in the heart of living creatures sounds it himself,” (42). Perhaps this is why the Sanskrit word for the heart chakra is anahata, meaning a sound which is “unstruck.” The essence of Reality is always vibrating out from the heart of every individual. The Truth is closer than you think, because when you think you separate yourself from it, but when you allow the vibration to resonate within your heart, you become that which you have been seeking.

This lecture is just a few short pages and brings together the chapter on Vedanta and the chapter on Shaivagama and it describes the popular philosophy of Vedanta as a kind of dualism as it rejects immanence and rejects the world of physical reality as being unreal. Shankara’s Vedanta sees action in the material world as only capable of producing karma. Kashmiri Shaivism, however, sees action as a manifestation of the ultimate, rather than a veiling or distraction of the Ultimate. “Shaivagama takes kriya [activity], in a wide sense, in the sense of chiti-shakti, in the sense of spanda, throb or pulsation to manifest,” (44). Singh points out that Shankara is distinct from Brahman. “If maya is something quite external, then advaita [non-dualism] cannot be maintained. If maya is shakti of Brahman, then surely, it is an activity of Brahman,” (45).

This distinction of whether or not maya is something separate from or is a unitary aspect of Brahman has practical as well as theological implications. In a dualistic, transcendent-only spirituality (whether Hindu or Christian) we see a correlation with the devaluing of the Earth, of the body, of women. Mother Earth, matter (which is an English word that comes from the root Latin, mater, or “mother”), and the feminine are all related principle ideas. In Hinduism, maya is feminine, and orthodox teachings are often misogynistic. However, Kashmiri Shaivism recognizes the feminine Shakti as a manifestation of, not as separate from, Shiva. Kashmiri Shaivism thus preserves elements of the ancient mother goddess spiritualities of ancient India, which formed a zone of the veneration of the goddess across India and the Fertile Crescent. Singh writes, “Maya is the creative power of the Divine, Maya is not a power of illusion,” (47). Further, Singh writes, “Manifestation only means making explicit what is implicit. Variety is not contradictory to unity,” (48).

Singh describes Shaivagama, Kashmiri Shaivism, as a true non-dual tradition that recognizes the essence of the Divine as both manifest within physical reality and also transcendent to physical reality. Non-dualism is not just an esoteric, theological concept, it is an organizing framework that changes the way we view human nature, physical reality, and the Divine. It brings us into harmony and unity with all that is. The practical concern is that those whose belief system is based on duality see the world through the lens of separation, of us/them. This leads, ultimately, to oppression and abuse of women, indigenous people and those who are labelled as “other” or “enemy of the people.” It also leads to exploitation and degradation of the environment because people functioning in dualism do not see that they are part of the environment and part of the Earth and think they can act without feeling any impact or repercussions of their actions. Perhaps, now more than ever, we should be striving for an experience of non-duality in order to become the medicine that is much needed in our current wounded world and fractured political state.