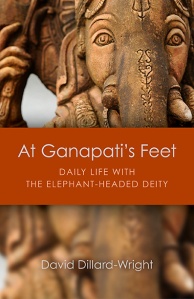 David Dillard-Wright is an Assistant Professor in Philosophy at University of South Carolina, Aiken. He has a broad range of interests in the philosophy of the mind, bioethics, meditation (authored the book, 5-Minute Mindfulness and others), and in his latest book, he describes his experience and interest in Hindu ritual and meditation. At Ganapati’s Feet is a short, quick read at 99 pages. It starts off autobiographically, with Dr. Dillard-Wright’s story of seeing a friend’s statue of the Hindu god, Ganesha, and being drawn to the statue. He sought out his own statue and installed it on his writing desk as he worked on his dissertation (published as The Ark of the Possible: The Animal World in Merleau-Ponty) and began offering prayers as he worked to Ganesha. He eventually made a promise that if his dissertation were completed and published, he would write a book on Ganesha (Ganapati being one of Ganesha’s 108 names).

I, too, have a statue of Ganesha on my writing desk (a small return gift for loaning a friend a copy of Gandhi’s autobiography). Ganesha is a liminal deity, a threshold god, the first to be acknowledged on entering a Hindu temple Ganesha is often thought of as the remover of obstacles, and also a patron god of writers as well – having made a promise to complete a writing, and when he ran out of writing instruments, broke off his own tusk to use as a quill (which is why he is shown having one broken tusk). I had picked up a few elephant statues over the past few years and was very interested in the symbolism of removing and moving through obstacles. I came to think of my leadership style at times as an embodiment of this elephant energy when I hit an obstacle – not to overpower it by force, but to refuse to budge or be forced backward on any issue I considered crucial to gradually make advances on toward a clinical or administrative goal. This was kind of between putting something on the back-burner (essentially putting off until later) and having something on the forefront of one’s focus. I developed an ability to have continual awareness on an issue and whenever the smallest opening appeared, to take a step or two forward and then hold, until the next step was possible. This was a kind of medium to long-term planning, and in the meantime I would go about the daily issues and concerns.

One of the interesting facets of this short book is Dillard-Wright’s background of passing through the Christian seminary. His spiritual practice appears to have seamlessly incorporated Christian and Hindu belief and ritual. In fact, he writes that his Hindu practice has helped to bridge the Christian gap between the spiritual and the earthly, Ganapati, himself embodies the union of animal head and human body. His two wives, Riddhi (prosperity) and Siddhi (spiritual attainment) also bridge the common tension between material wealth and spiritual wealth. The book examines an integration of Hindu and Christian theology to arrive at an embrace of both the material and spiritual worlds. Even the split between human and divine is repaired as Dillard-Wright describes that the Hindu “gods represent the latent powers within ourselves; aspects of our true nature,” (10).

Rather than claiming to have found “enlightenment,” Dillard-Wright describes having “found tools to lighten the load,” through “seeing the negatives themselves as part of the journey toward liberation…to push oneself ever closer to the divine nature as it unfolds in this world. Eventually we come to regard ourselves not as separate beings, but as aspects of Ganesha’s nature. We come to be the removers of obstacles for others,” (14). He further writes that the “path forward for humanity, the only way that does not lead to destruction, lies in mutual service and submission,” (14-15). He thus finds in the heart of Hinduism the heart of Christianity. He presents Hinduism as being more accepting of other religions, as it is a polytheism. While most Christians do not consider the study of Hinduism part of the path to God, Dillard-Wright states that almost “every major Hindu saint has at some time read and appreciated the teachings of Jesus, and many authors have seen Jesus as a great yogi,” (16). This concept of religious tolerance, while a founding principle of the United States, is currently a topic of great concern – as intolerance, in general, appears to be growing in the Land of the Free.

After a discussion of harmonizing contrasts between Hinduism and Christianity, Dillard-Wright moves to an exegesis of the symbolism of Ganesha. His comments about the broken tusk, in particular, are of interest. While we often think of elephants as slow and ponderous, Ganesha represents the lighting flash of the creative mind, using his four hands to write four times as fast as someone using a single hand. His one remaining tusk represents “single-pointed devotion and oneness with his father,” (Siva) (31). Turning the broken tusk to his advantage, this “symbolism means that Ganesha takes defects and quickly makes them into tools, thereby overcoming them. The quickness with which he fights his adversaries and composes poetry he also pours into his devotee’s lives, making them quick and nimble as well,” (31).

The next section of the book explores mantras and spiritual aphorisms of Ganesha, such as “Regard everything as holy,” (63) and “When trouble comes, retreat into meditation,” (65). The remainder of the book focuses on the steps of a ritual practice of puja, detailing the prayers and sequence of devotions and movements in the ritual worship of Ganesha, including the recitation of Ganesha’s 108 names.

This is an interesting little book, about a big subject, Ganesha the elephant-headed deity. It details the adoption of daily Hindu practice by a man who describes himself as a Christian, and is also a professor of philosophy. His handling of the topic is open, honest, straight-forward and thoughtful. It is well worth the short time it takes to read and raises many interesting topics in integrative religion and spirituality.

Here is the front cover of the book, exciting to see it start to take form after so many years working on it…

Here is the link to the publisher page for the book.

I have to start moving into a new phase now, done with writing and on to marketing and promoting the book. Totally new territory. I am going to start looking into conferences and bookstores for public appearances.

The timing of the book is excellent with my work at the VA. There is a national Office of Patient Centered Care and Cultural Transformation and my book is really consistent with their message. I was just down in Atlanta for the Whole Health: Change the Conversation conference and it was really energizing and helped me to get excited about the work of the book. It will be really interesting to see how the book does once it is out in the world.

In the meantime, I continue my day to day work at the VA. I have started the pilot run of The Hero’s Journey Class, based on the work of Joseph Campbell. It uses mythology and narrative as ways of assisting Veterans in their Return Home. Here is a photo of me at work on this project.

Otherwise, I have a few interesting possible projects on Patient Centered Care and staff wellness in the works. I will be presenting a poster next month at the annual meeting of the American Holistic Medical Association – Connection & Collaboration: Innovations in Patient-Centered Care. The poster is on Collaborative Poetry Writing as a way of engaging patients with psychosis and trauma histories.

I will post more details on the book publication as they are available.