A Review of The Theater of War

(We were a bit slow in getting this finalized, but still wanted to put this review out)

There are those few who go off to war.

There are their partners, parents, families and other loved ones who wait their return.

And then there are the rest of us, the multitudes who observe and comment from the edges. (Less than 1% of the population of the United States serves in the military).

This drama of observation from the edges has been playing out, day in and day out, over the past decade as we, health care workers, have sat with Veterans returning home from the wars in Iraq and Afghanistan: over two and a half million Veterans, more than half of whom have been seen in our VA clinics.

Intermingled with stories of celebration and reunion we have heard stories filled with pain, loss, emptiness, rage, fear, sorrow, loneliness, yearning, hopelessness …stories told by both those who have been off to war as well as those to whom they returned.

Then one day as we sat with a diverse group of community members in a small church on Beacon Hill in Seattle, it slowly dawned on us that the language of war has not changed in any significant way even as the words of those in battle have churned through every language ever spoken. And even beyond the fact that there is a transcendent language of war, the structure of the story of war is similarly immutable: there are those who are thrust into battle, there are those who love them and await their return and there are the rest of us, who at best approach with an earnest desire to play our part in the drama, if only as part of the chorus, or part of the audience.

These realizations occurred as we watched, fully engaged but helpless, the Outside the Wire production of Bryan Doerries translation of Sophocles’ Ajax. David Strathairn and Heather Goldenhersh were jarring in their roles as Ajax and Tecmessa. His relentless march toward suicidal doom, her desperate attempts to avert the inevitable as she shifted her gaze and grasp from him to the chorus, while the rest of us struggled to let go and hold on simultaneously. Tecmessa calls to the chorus, Ajax’s soldiers, and through them to us in the audience when she pleads for help where help is not easy to give, “for our hero sits shell-shocked in his tent, glazed over, gazing into oblivion.”

The Belvedere Torso, a marble sculpture carved in the First Century BC depicting Ajax.

And again she speaks to all of us as citizens of the United States as well as to the chorus, “Tell me. Given the choice, which would you prefer: happiness while your friends are in pain or to share in the suffering?”

The chorus, as many Americans, initially prefers not to get caught up in this ugliness and pain, prefers not to peer into the open and un-healing wound. Yet, eventually, they commit and say, “We will stay and share the pain.”

Perhaps that is all that we can do, and yet doing that may be enough, just simply not to turn away but rather to stay and feel the pain of another who is also part of us, part of our nation.

Watching the drama felt a bit like an ambush inside the wire, leaving us feeling stripped of the professional armor and weapons and sense of hope and healing that we generally carry with us into our work. The performance is a window into the past, 2500 years ago, yet feels as raw and powerful as listening to today’s painful stories of a Veteran who has served in Iraq, Afghanistan or Vietnam. We could do nothing but watch. We could do nothing but be there. The one thing we could do was commit ourselves to do what those in the chorus committed themselves to do, “We will stay and share in the pain.”

We witness the suffering of Ajax, who has been away at war for 9 years without leave, who has seen the horrors of the battlefield, who served honorably until losing Achilles, his closest brother-in-arms. When Ajax was disgraced by the Greek military command, who played politics and denied him the honor of receiving Achilles’ armor, Ajax goes berserk and slaughters innocent animals while in a delusional blood rage. In the aftermath, Ajax is consumed with unbearable shame – “What a joke my life has become” – and despite the desperate pleas of his wife, Tecmessa, and before his bewildered infant son, and despite the presence of his brothers-at-arms, he ends his life by suicide, the violent end of so many still who have gone to war.

These themes of suffering, betrayal, rage, moral injury, shame, and self-sacrifice feel as potent in the invisible, but lethal wounds of Ajax as they do in our current Veterans. After the performance, a panel discussion included two health care workers and two Veterans who had served in Vietnam and the other in Iraq.

It further squeezed the audiences’ hearts as one Veteran, overcome by raw emotion, said, “I have lived the life of Ajax.” And the next day, other Veterans who had seen the performance said the same thing.

Bryan Doerries spoke of a performance for active duty personnel where he asked, “Why do you think Sophocles, a Greek general, would write such a play?”

“To boost morale,” a soldier in the audience said. When Bryan asked how that could be, the soldier replied, “Because it is the truth.”

Sitting in the audience of Theater of War makes one feel helpless but also hopeful, because we can catch a glimpse of “the truth” of the aftermath of war that has remained unchanged throughout time. It is a sacred moment to share with our nation’s warriors; and it is a loving act, because listening is an act of love.

As Bryan said to conclude the discussion, “I used to think our role as civilians was about empathy, but I have come to see that it is about a shared sense of discomfort.”

Perhaps by being there we learn. Perhaps by learning we grow. Perhaps by growing we change, both in who we are and what we do, as individuals and as Nations.

The idea of drama, trauma and healing is ancient. VA psychiatrist Jonathan Shay has written about the role of the Greek tragedies and the healing function they served for the actors (many of whom were Veterans) and for the audience and culture, itself.

“We must create our own new models of healing which emphasize communalization of the trauma. Combat veterans and American citizenry should meet together face to face in daylight and listen, and watch, and weep, just as citizen-soldiers of ancient Athens did in the theater at the foot of the Acropolis.We need a modern equivalent of Athenian tragedy. Tragedy brings us to cherish our mortality, to savor and embrace it,” (Shay, Achilles in Vietnam, 194).

This is exactly what Bryan Doerries has done through his productions for active duty military, Veteran, and civilian audiences, bringing together all to participate in a shared sense of discomfort and to participate in witnessing, dialogue and discussion after the performance. 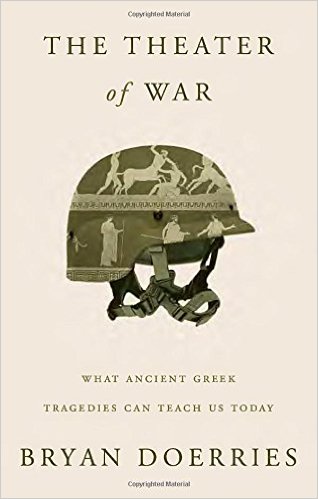 In his new book, Theater of War: What Ancient Greek Tragedies Can Teach Us Today, Bryan writes that his book “is about the power of tragedies to transcend time, to comfort the afflicted and to afflict the comfortable. At its core, it is about how stories can help us heal and possibly even change, before it’s too late.” (8). Bryan also has a book of his translations, All That You’ve Seen Here is God, that are used for different performances by Outside The Wire.

Outside the Wire has presented the Theater of War over 300 times across the United States. You can visit the website for information on performances .

UPCOMING PRESENTATION AT THE ACGME:

Review, which express our own views, written by: