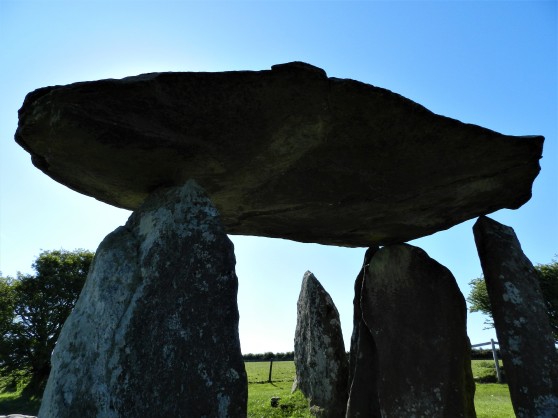 I am slowly posting some of the photos from our recent trip to England, Wales, and Iceland. We pick up driving north from Pembrokeshire Coast National Park. Our first stop was Pentre Ifan – a megalithic monument from Neolithic times, perhaps as old as 3,500 BCE. 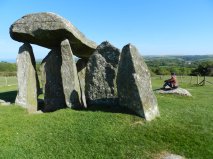 From there, a short stop in Nevern to see a celtic cross and Nevern Church.

We then drove up to Aberystwyth for a nice lunch at Ultracomida and then stopping in Holywell – the birth place of my Great Great Grandfather, John Roberts.

We then made our way to Manchester where we met up with friends we knew from New Zealand and Chicago.  I went into the city on a rather dreary day, fitting since most of what I knew about Manchester came from reading about the bands Joy Division and New Order (for some of my writings on Joy Division follow the link to my website). I bought a copy of Paul Morley’s Joy Division: Piece by Piece – Writing About Joy Division 1977-2007 at the Manchester Art Gallery. Morley, whose career as a music writer started about the same time that Joy Division ended, wrote:

“There’s no doubt though that Manchester moved into the future when for a time it seemed as though it was sinking back into the past it would never escape. The first people to really believe that Manchester could move into the future, that change was important especially in an area that had initiated some of the most important technological, creative and environmental changes in modern times – in a way, the birthplace of the modern – were those people that used punk music and then post-punk music, to work out how ideas and ideals would keep alive this progressive spirit,” (46).

Reading Morley reminded me of how important music was for me growing up and how much bands from this region were part of my life as a teenager and young man. This idea of rebelling against the constrictions and weight of the past and convention and struggling to find a way forward into the future – a way that was creative, bold, visionary, and meaningful – came to me through punk and post-punk music.

Given the rainy, dreary day, I spent most of my time in the John Rylands Library. A private library that Rylands widow created as a memorial to the entrepreneur and philanthropist and Manchester’s first millionaire (1801-1888) who made his money in the textile industry. 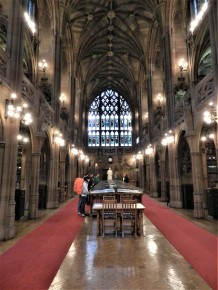 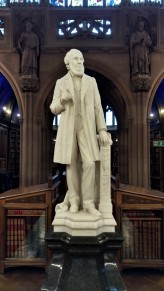 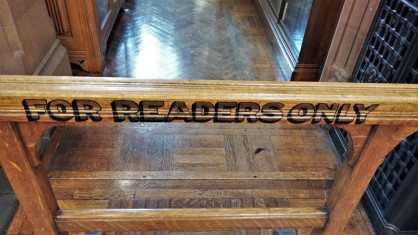 I sat and wrote at a little desk in a nook in the library, after I had looked through the special exhibit, “The Alchemy of Colour.”

Our exhibition, The Alchemy of Colour, is is full of stunning manuscripts! 🎨📚 Here are just four of them – do you have a favourite? ♥️ #jrlColour pic.twitter.com/O2QADByf5Q

We brought to a close a wonderful trip to England and Wales, with beautiful weather, the only real day of full rain was in Manchester, but I didn’t mind – its seemed appropriate. The hot weather has continued in Wales and the drought has reveled signs of ancient civilization, revealing Roman forts and Iron Age structures. 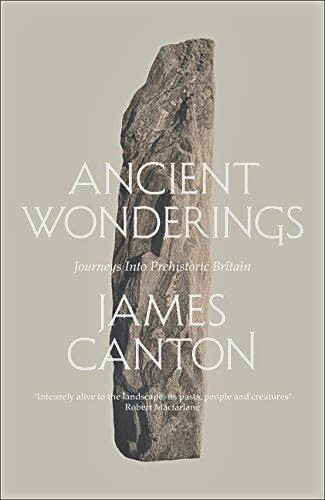 Our view of history is often so short-sighted and narrow. Starting with my own thoughts of my genealogy that stretched back into Wales, Ireland, and England, I kept seeking older history. Lullingstone Roman Villa, Little Solsbury Hill, St. David’s Head, Pentre Ifan – these places on the land hosted human beings 2,000 years ago to 5,000 years + ago. We know so little of our ancient ancestors and of their ancient wisdom. I picked up James Canton’s book, Ancient Wonderings: Journeys Into Prehistoric Britain, at the Waterstones near Picadilly Circus. He concludes his book on his journeys into the past through the landscape of the present:

“I had dug ever deeper into the minds and beliefs of those souls who lived upon these lands thousands of years before us and it had become ever more evident that to understand the ancient British ways and practices, you had to see these lands in relation to Europe. Eight thousand years ago, Doggerland had physically linked Britain to the continent. Then Britain had become separated. In the Neolithic Age, while there had certainly been a sense of cultural practices being shared across these islands, as the spread of stone circles and the development of agriculture illustrated, Britain had been more isolated, then more inward looking. By the Bronze Age, travel had extended beyond voyages around the islands of the Britain and Irish archipelago…I saw a map of prehistoric Britain and Europe before me with a series of black lines criss-crossing and steadily enmeshing the land, which signified the journeys made in distant times, the movements of highly skilled people, of gold and tin, of the finest flint arrowheads, of Bronze axes and swords, of jet and of jewellery…and of astronomical instruments…I would venture over the seas, beyond the prehistoric worlds of Britain to those of mainlands Europe…” (321-322). 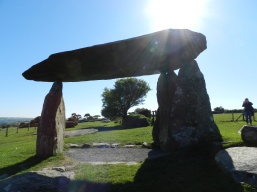 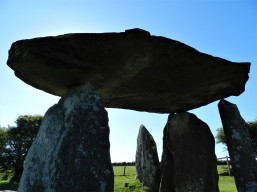 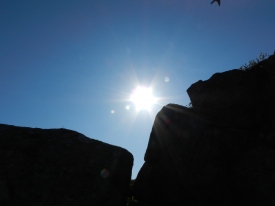