We just got back from a holiday to England, Wales, and Iceland. I’ve got quite a few photos, so I’ll post them in several batches. We had 5 sets of friends we visited, most we knew from New Zealand, although Roberto is an old friend from back when we lived in Chicago. 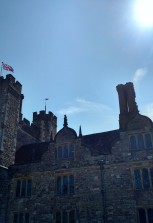 One of the most striking things to me was how familiar England felt, even though I had only been there once when I was 16 years old. That trip I was very focused on punk and new wave music and came back with a suitcase full of vinyl. I was also interested in castles and we visited quite a few of those. That trip with my family came about because my Great Grandfather, Iorworth Roberts, had passed away and left my mom some inheritance and she felt a good use of it would be to visit the land of his birth: Wales.

England felt very familiar this trip. I think this was partly due to all the accents we were surrounded with in New Zealand. Almost every place we visited reminded me of someone’s accent we heard in New Zealand. Forty percent of the population of Auckland, New Zealand was born in another country and there is a sonic landscape of different accents there. Another factor is that New Zealand, as a commonwealth country with close ties to the UK, has many cultural similarities with the UK. New Zealand also has many UK brands and shops and a few things I thought were New Zealand brands actually turned out to be from the UK, so even shopping at the grocery I found things that reminded me of “home” in New Zealand.

I will share with you, Dear Readers, some of the photos and itinerary of the trip. We will start with England. We took Icelandair, a direct flight from Seattle to Keflavik, with a brief layover (we stayed 5 days on the return trip), then on to Gatwick. I had come down with a bad upper respiratory virus, so the first week and the traveling was a bit rough. We first stayed in Sevenoaks, a little town south of London. We visited Knole Park, with its over 500 year old house.

We took a day trip to Hever Castle, the family home of Anne Boleyn, who was executed by Henry VIII who then took possession of Hever. Henry the VIII had 6 wives, two of whom he had beheaded, which was part of his break with the Catholic Church. Henry VIII also began the dissolution of the monasteries in the 1530s. Many of the Abbeys eventually fell into disrepair and are now ruins. It is worth noting how much chaos one man in power can create.

We took a day trip up to London on the train, disembarked at Charing Cross, walked through Trafalgar Square, through St. James’ Park, past 10 Downing Street, and back to the train. We stopped in a couple book stores and cafes along the way. 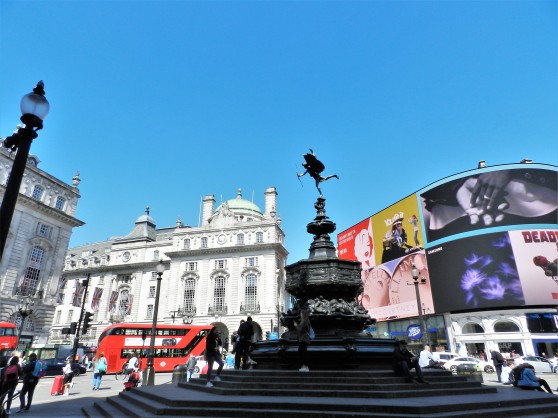 After leaving the Sussex area, we hired a car and drove West, stopping at Little Solsbury Hill on our way to visit friends in Cardiff, Wales. This was the site of an Iron Age hill fort, dating back to 300-100 BCE. The name “Solsbury” is thought to be related to the Celtic goddess, Sulis, who was worshiped at the thermal springs in what is now called the city of Bath. The etymology of “Sulis” is as follows: “the exact meaning of the name Sulis is still a matter of debate among linguists, but one possibility is “Eye/Vision”, cognate with Old Irish súil “eye, gap”, perhaps derived from a Proto-Celtic word *sūli- which may be related to various Indo-European words for “sun” (cf. Homeric Greek ηέλιος, Sanskrit sūryah “sun”, from Proto-Indo-European *suh2lio-).”

Solsbury Hill was also the site of a spiritual experience that Peter Gabriel had around the time (1975) he was leaving the band, Genesis, and starting his solo career. He describes climbing up Solsbury Hill, seeing an eagle fly out of the night and having a visionary experience of hearing a voice that gives him guidance, saying “Son…grab your things I’ve come to take you home.” The song “Solsbury Hill” was his first solo single. Gabriel said the song is “about being prepared to lose what you have for what you might get … It’s about letting go.” The song also works with the theme of “home,” whether our home is here amongst our “things” or whether it is elsewhere.

When we climbed up on Solsbury Hill it was warm and sunny, skylarks were singing. I found a stone outcropping on the North side of the hill. I sat for awhile in the warmth and meditated, trying to reach back into the ancient past of the hill and the humans who have lived on and around it. 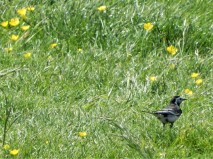 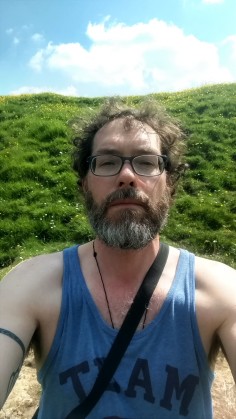 From Little Solsbury Hill, we traveled West and crossed the border into Wales and we will continue with the journey in the next blog post.