I have not posted anything for some time as I have been absorbed in wrapping things up in New Zealand and getting settled in Seattle. I did take a last road trip before I left New Zealand and drove up to Cape Reinga at the northernmost tip of the North Island. This is a sacred place to the Maori who believe that departed souls leave New Zealand from this point (actually climbing down a lone Pohutukawa tree located on a large rock, a tree which has never been seen to bloom).

On my way up, I stopped at the always interesting Café Eutopia in Kawakawa. 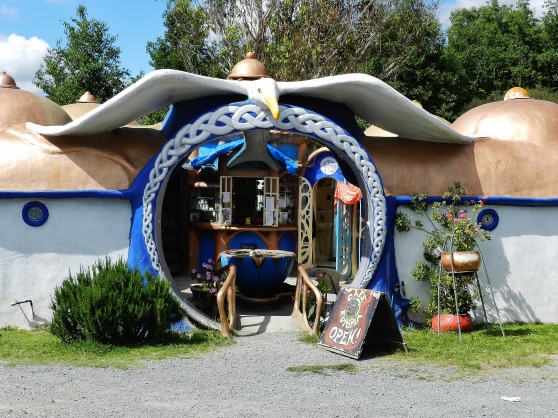 It was a great trip and a fitting end to my time in New Zealand. There was a different feel at Cape Reinga, driving along the spine of the North Island as it gradually comes to an end. The hill where the lighthouse is planted is called Atua Peruperu. 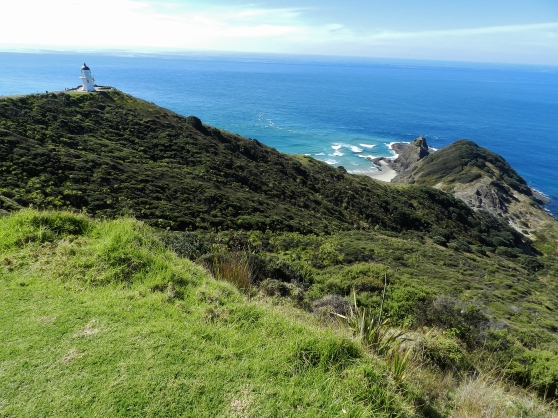 Here is the pohutukawa (kahika) tree known as Te Aroha (Love). Te Aroha’s roots, on Te Reinga, are the steps used by departing souls into the underworld.

Reinga is also the meeting point, the confluence, of the Pacific Ocean and the Tasman Sea. It is thus a meeting place of powerful forces. The line between the two bodies of water is actually visible extending out from the land.

I drove back down Northland and stayed near Mangonui (known for its fish & chips) in a caravan on a property on a farm. The couple who leased it out were very nice and it turned out the man was an American ex-pat. There were so many sounds that night as I went to sleep: the cry of various birds and peacocks in the distance and various farmyard sounds. So much to listen to, such abundance of life. In the morning I awakened to the sound of cows in the pasture right outside my kitchen window. I had a nice breakfast of farm fresh eggs on, an orange off the tree, and coffee…

The next day I drove out to Karikari peninsula and then made my way back to Auckland. It was a quick trip, but I covered a lot of ground. It was a perfect trip to reflect on the themes of endings and beginnings and my time in New Zealand, as my (living) soul prepared to leave New Zealand after my 1232 days (3 years, 4 months, 13 days) in New Zealand…