We hired a car and drove east out of Reykjavik heading out toward Vestmannaeyjar Islands (also known as Westman Island). It is called the Westman Islands because of a historical event in which Gaelic slaves were slain after having killed one of their captors. The Icelanders called these slaves “Westmen” as they were from the west of Scandinavia – this was in the era of the Vikings. In retribution most of the Westmen were killed and the island was thereafter called Vestmannaeyjar (Westman). I did not know this history until we went on a volcano and puffin bus tour of Heimaey Island, the largest of Vestmannaeyjar. My wife pointed out that I have a strange predilection for trying to find a remote island and then finding an even smaller, more remote island off the island – she reminded me of our Bruny Island trip off of Tasmania. That trip was a bit of a mixed bag, although I did go out at night to watch the penguins come in for the night and “dash” across the open beach.

Prior to arriving in Iceland, I did not necessarily connect it with the Vikings, but Viking history is a strong cultural heritage of Iceland. Iceland is now part of the European Union, but was settled in 874 by Norwegians. Slavery was widespread amongst many people in history. I also recently learned that the English word “slave” actually derives from the word “Slav” as in “Slavic.” (I learned this recently in Peter Frankopan’s book, The Silk Roads, also see the etymology of the word “slave.”). The Vikings plundered not just British Isles, but also down through the Slavic peoples, who apparently made good slaves were sold to (Muslim) nations in the Middle East. I came from two different peoples who were enslaved by the Vikings: the peoples of the British Isles and the Slavs. I also have a touch of DNA from the Scandinavians as well.

Standing in front of a farm near Eyjafjallajökull

Prior to taking the 35 minute ferry ride from Landeyjahöfn, we stopped at Seljalandsfoss waterfall and watched the sea birds fly through the mist and land on the cliff’s edge where they had nests. 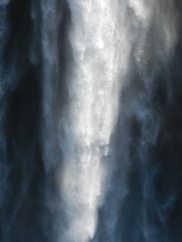 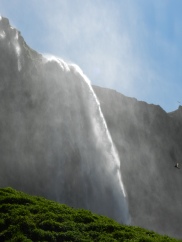 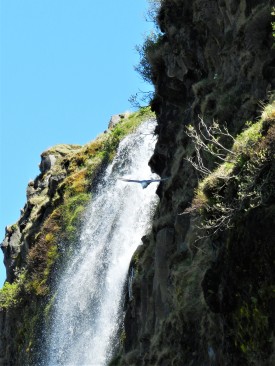 We drove a bit further east and got a view of Eyjafjallajökull, whose 2010 eruption had shut down air traffic in Europe for a period of time, and then caught the ferry to Heimaey Island. 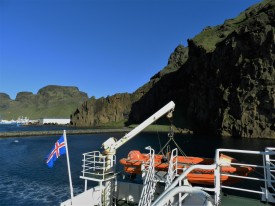 Heimaey Island had its own volcanic eruption in 1973 with the creation of Eldfell, a 200 metre volcanic cone that covered part of the city in lava up to 30-40 metres deep (there are street signs that have been placed at the points of intersections below the lava flow). The island was evacuated and actually increased 20% in size. 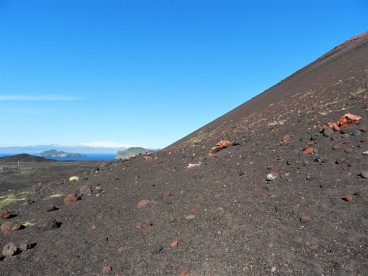 The bus tour we took was informative and entertaining as we learned the history of the island and saw some of the sites, including a large puffin colony. We also stopped at the Aquarium and Natural History Museum which is also a puffin rescue. The majority of puffins are able to be released back into nature, but a few were not able to be reintroduced and live on site and are quite tame.

After the puffin and volcano tour, it was still light out (as it stayed light pretty much all night) so I drove back to the puffin colony. It was cold and windy on Stórhöfði peninsula, the guide said this is the windiest place in Europe and my eyes frequently watered as I watched the cute, awkward little puffins flap-flap-flapping their way to their burrows for the “night.” I spent a great and beautiful time watching these little birds and taking a couple hundred slightly blurry photos (either something is wrong with my auto-focus, or I must have been shivering more than I thought because every photo is slightly blurry – this was my third attempt to see puffins, the other two were unsuccessful on two different trips to Nova Scotia).

Puffin peaking out of burrow

We just spent one night on Heimaey and could have spent a couple more, it was very peaceful and beautiful and had a brewery and a number of nice restaurants. We took the ferry back, made our way back toward Keflavík airport. We had a panic for a bit as we were in some rural areas and oddly the gas stations did not accept cash or American credit cards without PIN – we finally had to buy a money card with our credit card and then use it at the pump. We stopped briefly at the Flói Bird Reserve and were going to walk around but it was very boggy and we were about to get on the plane and didn’t want to pack wet shoes. There was the strangest bird that would fly straight up and make a sound like an electronic toy buzzing. I couldn’t get a good view of it through the camera.

We carried on toward Keflavík, occasional horses and farms gave way to volcanic landscapes, sometimes covered with moss and lichen and then we made the 8 hour flight back to Seattle. 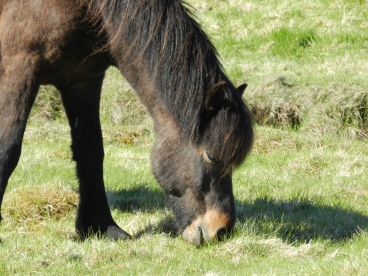