“Sri Krishna alone is my lover. I have gone mad with grief.”

“I will have no peace of mind unless Sri Krishna comes to me.”

These quotes open Gnanananda’s book on Mira Bai, described as having “dedicated her entire life to God and endured all the difficulties of life. Awake or asleep, all the time she thought only of Sri Krishna.” Princess, widow, mystic, poet, musician and Hindu Saint, Mira Bai (alternatively Mirabai or Meera Bai) lived in the 1500s (1498-1546) in Rajasthan (the Northwest of modern India). She is known as a “the most renowned woman poet-saint of India,” (Daniel Landinsky, Love Poems From God). Gnanananda describes Mira as “the very embodiment of Bhakti (or devotion to God).” Wikipedia describes Bhakti as “closely related to Islamic Sufism, which appeared around the same time: both advocated that a personal expression of devotion to God is the way to become at one with him.” Gnanananda expresses this bhakti devotion with loving care of the subject of Mira Bai. 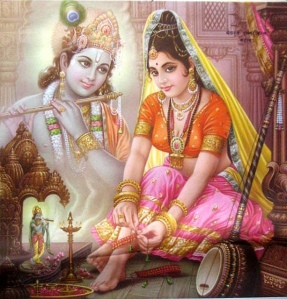 This Kindle e-book gives a biography of Mira’s life, starting with her birth in a noble family. As a small girl she saw a wedding procession and asked what the bridegroom was and then asked to have one to play with. Her grandfather gave her an idol of Krishna and said “Take good care of him.” Another story tells of her wanting the Krishna idol of a holy hermit. The hermit was visited by Krishna in a dream and was told to give his idol to the young girl. When she was older, Mira Bai was married to a man whose family disapproved of her constant devotion to Lord Krishna. At this point, Gnanananda admits,

“It may seem strange that one should regard God as the husband and behave accordingly. But it is not a new thing in the Bhakti cult. There are several types of Bhakti (devotion). They are classified according to the relation that exists between God and the devotee.”

Gnanananda states that Madhurya Bhava is the highest form of devotion for it includes all other forms of relationship. 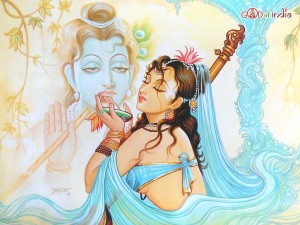 This type of devotional love of God has roots in Christianity, as well, for instance in the writing of St. John of the Cross, author of Dark Night of the Soul  (who lived during a similar time, 1542-1591) and John of Ruysbroeck  (1293-1381) in his book, The Adornment of the Spiritual Marriage; or even the earlier Old Testament book, The Song of Songs in which bodily love and spiritual love are intertwined. A very nice book of poetry exploring the writing of poets from many religious traditions in regard to different forms of the divine love is Daniel Ladinsky’s Love Poems From God (2002). The Poet Seers website is also a nice place to visit for poems and short biographies of poets.

Mira was thought to be mad by her in-laws, and they attempted to sequester her, poison her, and tarnish her name. However, “she was known among the people as ‘a great saint,’” (Gnanananda). Her fame was such that the Moghul Emperor, Akbar the Great, (who was an integrator of religions) visited Mira in disguise and laid a diamond necklace at her feet. Although she refused the gift, Akbar (in disguise) said “I cannot take back what I have brought for Sri Krishna. Please do not refuse,” (Gnanananda). Thus, she was not able to turn away Akbar’s gift. 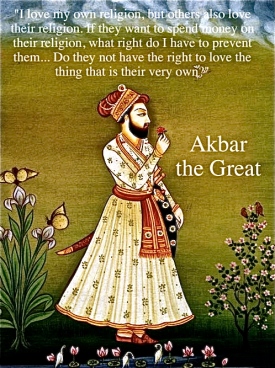 However this gift made her in-laws even more angry with her and she survived several attempts to kill her. She sought refuge at a holy place, however the leading man at the site refused her entrance as she was a woman. She rejoined, saying, “I thought the only man in Brindavan is Sri Krishna. Now I see there is a rival.” Thus she outwitted the holy man as, “In the Bhakti cult the love of the wife for her husband is said to be the best form of devotion. According to this all are women in this world. God is the only Man,” (Gnanananda). This short book ends with a discussion of the disappearance of Mira, offering different possible ends of her life, for instance, that she was finally merged bodily with Sri Krishna, such was her devotion. This mirrors the story of the Virgin Mary’s Assumption bodily into heaven.

Mira Bai was a strong woman, poet, singer, mystic and Hindu saint. As a mystic, she argues for a direct communion with God and this was threatening to the male hierarchy, both religious and political. She is a champion for women’s (and all humans) rights to worship God directly and her devotional poems blend a physical sensuality and subversive, revolutionary, single-minded love of God which takes precedence over all other laws and hierarchies.

It is fitting to end with a couple of poems of Mira Bai, translated by Daniel Ladinsky.

A Hundred Objects Close By

I know a cure for sadness:

Let your hands touch something that

I bet there are a hundred objects close by

that can do that.

beauty’s gift to us–

her power is so great she enlivens

the earth, the sky, our

In my travels I spent time with a great yogi.

Once he said to me,

“Become so still you hear the blood flowing

One night as I sat in quiet,

I know it is the source of

The earth looked at Him and began to dance.

Mira knows why, for her soul too

If you cannot picture God

in a way that always

You need to read 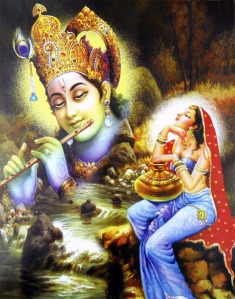