Music has been a bridge for me lately, it always is something that I rely on when I am in a big transition or when I have an inner chaos of turmoil. I think that the energy of music has the ability to connect to inner states, to serve as a mirror back that amplifies the inner state until it can be clarified, transformed or resolved in some sense. In this aspect, music is therapeutic. This is nothing new as music has long been associated with healing rites and rituals and as having the ability to bring together body and soul. While the roots of music and healing are in the sacred, we have lost this association in the modern world. For me, there are at least two levels to the transformative nature of music as it creates correspondences between inner and outer. There is the physical aspect of the music itself, and there are also the emotional and spiritual themes of the lyrics which can sometimes make sense of this often mysterious life we live. What I am going to write about in this column is purely instrumental music, Miles Davis’ “In a Silent Way.”

In a Silent Way was released July 30, 1969 on Columbia Records. It was recorded in one session date on February 18, 1969 at CBS 30th Street Studio B in New York City. It was the first of Davis’ fusion, electric albums. For me, it combines the best aspects of the classic 1959 album, “Kind of Blue” and the dissonant 1970 album, “Bitches Brew.” In 2001, a three-disc box set was released, “The Complete In a Silent Way Sessions,” and this is what I first started listening to as I entered into a stage of transition moving back from New Zealand to the US. (Details about the album are taken from the Wikipedia entry for the album).

The Complete Sessions are 3.5 hours of music, while there are a few songs that I sometimes skip, in general I find that I can get seriously lost in this album – in a good way – the kind of being lost that is pleasant and soothing, and often I come out of it feeling kind of “found,” or at least more at peace. The original 1969 album consists only of two songs, as it appears on CD, “Shhh/Peaceful” (18:16) and “In a Silent Way/It’s About That Time” (19:52). The LP lists the songs as: 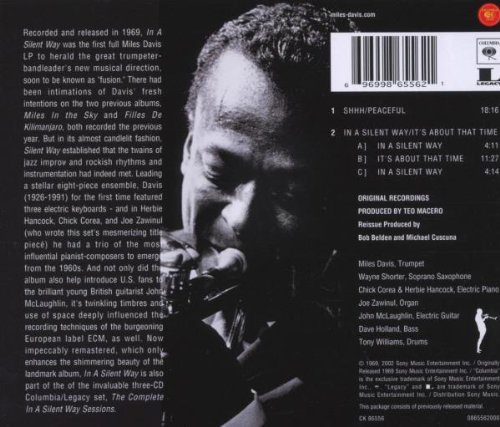 What is apparent from looking at the song titles is the way that there is an introduction, an interlude of another song/theme and then a return to the starting point, transformed though after the journey through. As I write this, I do realize that is one of the reasons that I find this album so orienting and soothing for me. There is a lot of wandering, exploring and creating space, and yet there is this continual return. This is even more pronounced in the Complete Sessions which has 78 minutes of different versions of the core songs from the original album. Even in some of the most unstructured explorations, there is often still a simple, repetitive, bass line or a rhythmic click of a drum stick on the rim of the snare that provides an orienting anchor. It is this rhythmic element of the album that made it so conducive to the more modern remixes found on Bill Laswell’s 1998 album, Panthalassa: The Music of Miles Davis 1969–1974, which is where I first heard these songs, as well as on the 1999 multiple artist Panthalassa: The Remixes.

“In a Silent Way” features many great musicians who went on to have impressive careers themselves:

As I mentioned, I can really get lost in this album, the dissonant elements of the brass, guitar and sometimes electric piano and organ pull me out, like exploring interstellar space, or closer to Earth, like the darting fish of a coral reef. While the bass and drums, and sometimes other instruments, build a solid, repetitive structure, like the hidden pulse of galaxies or the rhythmic waves over a reef. These are the two images that I get when I listen to the music, space and the ocean.

What was interesting, recently, was a conversation that my wife and I had about the album. That is not surprising as I have pretty much left it in the CD player in the car for the past months. That particular day we were juggling a lot of things, working on buying a house being the primary thing, and Mary Pat said “this is the first time I like this album, all the chaotic dissonance is like my own thoughts with all this going on.” I was surprised she found the album primarily dissonant, because I could say it is dissonant just as easily as I could say it has a strong rhythmic foundation; or that is even quite open and simplistic even as it is possible to listen to the silence which structures the notes. It is interesting that we had listened to this album in different ways and even more interesting that she had found the dissonant elements soothing on that particular day, as that is something that I have been thinking about lately, the correspondence of inner and outer states related to music.

In a Silent Way, that is the name of the album. Even the name makes me think about this space between the notes, about what it is that is being communicated silently. This brings to mind what all the mystics end up raving about, the silence, the deep and profound meaning that defies words. For instance, Carlos Castaneda writes of “inner silence…a peculiar state of being in which thoughts were cancelled out and one could function from a level other than that of daily awareness…[and to reach this state practitioners]…devised endless ways to shake themselves…at their foundations in order to reach that state,” (The Active Side of Infinity, 103-104). Paradoxically, to reach this state of quietude may require some form of agitation or surprise, thus we have the surprising dissonant elements of “In a Silent Way,” that are required in order to reach the silence. Juan Mascaro in the introduction to his translation of The Upanishads, writes that the “silent voice of the Eternal is perpetually whispering in us his melodies everlasting,” (12). The way of meditation involves quieting the mind, coming to terms with desires, in order to listen to that silent voice. The way of the shaman, which is the way of many contemporary musicians, is to find the silence through the noise or dissonance, for instance the energized focus that can come after a punk rock concert.

There is something about finding music in the outside, that when it corresponds to the inside, brings about some transformation.

What is it that brings resolution of a state of inner tension? Reaching the inner silence. How is inner silence reached? Not always through a direct quieting of the mind, sometimes it is reached by getting shaken to your foundations. “In a Silent Way” combines a little bit of several paths: the dissonant shaking, the rhythmic repetition and the liberal use of silence. Lately, there is something about all these elements that speak to something within me. I find a sense of calm and purpose in the music, the structured elements help me feel focused, the dissonant elements help me to feel expansive, and the silence – I find myself in the silence, some calm, perhaps even the silent voice of the Eternal.