Published through the Bollingen Series, Princeton University Press 1953, this edition 1984
Selected and edited by Gerhard Adler in collaboration with Aniela Jaffe
Translated from the German by R.F.C. Hull 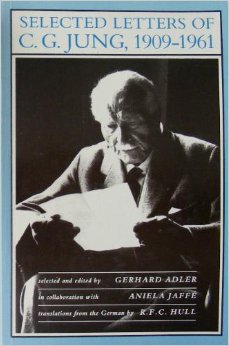 I picked up this book intending to just read through a few of the higher profile letters to people whom I recognized and was interested in, such as Henry Corbin, Sandor Ferenczi, Herman Hesse, James Joyce, Erich Neumann, Heinrich Zimmer and Upton Sinclair. I found myself, however, drawn into replies to anonymous writers concerning questions about God and spirituality as well as letters to religious figures. In general, the longest letters are those that discuss God and religious and spiritual themes. Jung, himself in the letters, states that in his published works, the “language I speak must be ambiguous, must have two meanings, in order to do justice to the dual aspect of our psychic nature. I strive quite consciously and deliberately for ambiguity of expression,” (108-109). This is often what I first felt reading Jung’s work, “Does he mean this, or that, is this ‘real’ or symbolic?” When he would write about “archetypes,” “the self” and the “God-Image,” I was never sure in what sense Jung thought these “things” existed. He obviously thought they were important unconscious influences and that they were involved in therapeutic processes.

It has become clear to me after reading Jung’s recently published journal, The Red Book, that Jung was primarily a mystic who strove to translate his experiences into the scientific and objective language of psychology. In addition to trying to write to the unconscious as well as consciousness of his readers, he was trying to create a language and science that was more objective than his subjective, but deep and meaningful inner experiences. In his letters, he is more open, and doesn’t seem to strive for ambiguity in his language. The letters take many forms: consoling a woman with terminal cancer and talking about his own near death experience after a heart attack; giving therapeutic advice to other therapists; giving tips on how to interact with difficult influential people; clarifying to curious (or in the case of the orthodox religious, irritated) comments about his writing and theories; trading books and thoughts with other writers; discussing dreams; and sharing his professional and spiritual dilemmas with confidants. What comes through in the letters is a devout man, exploring what is of utmost importance to him while trying to help others on a similar path. Jung had many unusual experiences and used his inner life as the template for his lifelong quest to understand the unseen forces within us that shape our lives: the unconscious and God.

I’ll just give a couple quotes in closing from the letters. This is from a letter to an anonymous woman, “our proper life-task must necessarily appear impossible to us, for only then can we be certain that all our latent powers are brought into play,” (16). And this, a longer quote from a December 18, 1946 letter to Father Victor White, “Yesterday I had a marvelous dream: One bluish diamond, like a star high in heaven, reflected in a round quiet pool—heaven above, heaven below. The imago Dei in the darkness of the earth, this is myself. The dream meant a great consolation. I am no more a black and endless sea of misery and suffering but a certain amount thereof contained in a divine vessel. I am very weak. The situation dubious. Death does not seem imminent, although an embolism can occur anytime again…It seems to me as if I am ready to die, although as it looks to me some powerful thoughts are still flickering like lightnings in a summer night. Yet they are not mine, they belong to God, as everything else which bears mentioning,” (69-70).